How to Trim Pigs’ Hooves 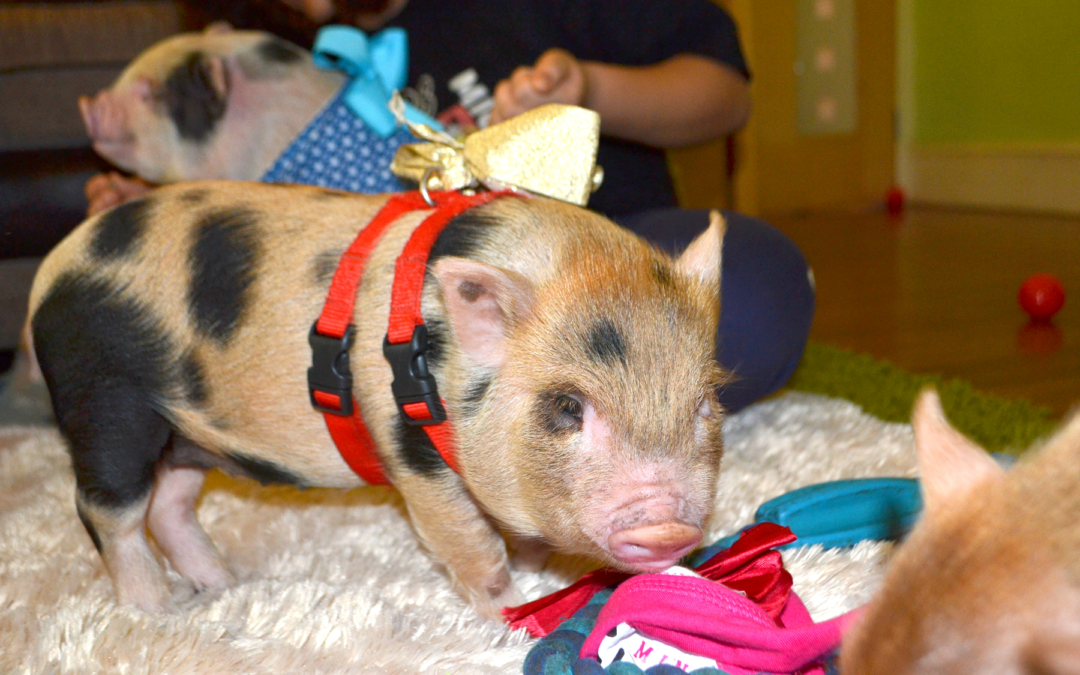 THE STRUCTURE OF A PIG’S HOOF

Want to learn how to trim Miniature Pig Hooves? Welcome to our Blog where we hope you will find all the information you need to become more confident at clipping your pig’s trotters.

Miniature pigs’ feet are called trotters. Their trotters consist of four toes, two large ones at the front (frontal toes) and two dew toes or dew claws, which are smaller and are positioned towards the back of the trotter; these are not used for walking. The top part of the hoof is hard and is made up of a special protein called keratin, whereas the inside of the hoof is very soft.

The hooves are cloven in shape (divided in two) to enable the pigs to have more stability when walking. That is why pigs, along with other livestock animals, are often referred to as cloven footed animals. However, fused hooves are not uncommon and can appear in both wild and domesticated pigs. This is not ideal as it can make walking quite difficult for larger and heavier pigs.

Pigs hooves need regular trimming to prevent lameness and the hooves overgrowing and causing wounds. The frequency depends on the variety of miniature pigs, as pigs do not have the same rate of hoof growth. This also depends on the kind of surface the animals are kept on. On hard standing surfaces the hooves will wear away to some degree when the animals are walking, requiring less frequent trimming, than when pigs are kept on softer standing areas such as soil or woodchip. Generally, Miniature pigs will need to have their hooves trimmed every 6 months to a year. However, this can be as early as every 3 months in younger pigs as their hooves grow faster. HOW TO TRIM YOUR PET MINIATURE PIG’S HOOVES

To make hoof trimming an easier job, Miniature piglets need to be accustomed to this from a young age. As a Miniature Pig Breeder we handle baby piglets as soon as they are born to ensure they are not afraid of being touched. Piglets by nature are scared animals because in the wild they would be prey to others such as wolfs, coyotes or foxes. Their natural tendency is to run when they are frightened. By handling and touching the babies on a daily basis they get accustomed to having their bodies and feet touched without showing any signs of fear.

From the time piglets come to live with their new owners, it is important to continue touching their feet as part of daily handling. Piglets will, therefore, not be alarmed when you start trimming their hooves. It is much less stressful for a piglet to have their hooves trimmed in this way rather than trying to restrain a pig, making them more scared.

Begin by touching the feet all over and ensure your piglet is comfortable and relaxed. This is easier done after they have had their meal and are ready to settle for rest. Next, ensure that the trotters are clean so that you can see the living tissues, called corium, containing blood vessels, which are pink in colour. Also, identify the white line around the tissues. Using sharp sheep shears or goat hoof trimmers trim away some of the overgrown nails (on the white line) on both sides of the toes. Nails on dew claws also need to be trimmed away, but do take care as it is harder to see the corium on these toes.

It is also a good idea to use pet nail grinder or a Dremel after trimming the hooves. As well hoof shears, nail grinders can be purchased from online stores such as Amazon or E-bay. Gently grinding away sharp edges of the hoof, especially when they are in close proximity to the corium, will ensure that no damage is done to the living tissues. The Dremel would stop rotating once it touches corium, so it is a safe and a very effective tool for pig hoof trimming and polishing the rough edges. It is especially useful around the soles and heels and in-between the frontal toes.

When trimming your pet pig’s hooves, it is useful to pay attention to the health of the sole and heel, making sure no foreign objects are embedded in them such as thorns or stones. These can make walking painful and are one of the most common causes of lameness in pigs.

If you are at all concerned about your piggy’s toes or hooves, always get in touch with your vet. THINKING OF ADDING ANOTHER MINIATURE PIG TO YOUR FAMILY?

If you are looking to add another Miniature Pig to your family, please, visit our Miniature Pigs for Sale page. We sometimes have small piglets or young trained adults for sale and would be happy to assist you.

We use cookies on our website to give you the most relevant experience by remembering your preferences and repeat visits. By clicking “Accept All”, you consent to the use of ALL the cookies. However, you may visit "Cookie Settings" to provide a controlled consent.
Cookie SettingsAccept All
Manage consent

This website uses cookies to improve your experience while you navigate through the website. Out of these cookies, the cookies that are categorized as necessary are stored on your browser as they are essential for the working of basic functionalities of the website. We also use third-party cookies that help us analyze and understand how you use this website. These cookies will be stored in your browser only with your consent. You also have the option to opt-out of these cookies. But opting out of some of these cookies may have an effect on your browsing experience.
Necessary Always Enabled
Necessary cookies are absolutely essential for the website to function properly. This category only includes cookies that ensures basic functionalities and security features of the website. These cookies do not store any personal information.
Non-necessary
Any cookies that may not be particularly necessary for the website to function and is used specifically to collect user personal data via analytics, ads, other embedded contents are termed as non-necessary cookies. It is mandatory to procure user consent prior to running these cookies on your website.
SAVE & ACCEPT